The presentation slides can be viewed here: The Color of Wealth in a Racially Plural America: Lessons Learned From the National Asset Scorecard for Communities of Color (NASCC) 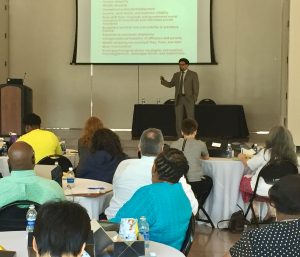 The 21st Century Cities Initiative welcomed Darrick Hamilton to campus to discuss his research and policy work on the racial wealth gap in cities with Johns Hopkins faculty, students, and staff. Dr. Hamilton is Associate Professor of Economics and Urban Policy and Director of the Milano Doctoral Program at The New School for Social Research in New York City. He is a stratification economist, which fuses insights from multiple social sciences to examine collective group actions and processes and has been used to explain the persistence of economic inequality across races.

Professor Hamilton discussed a new research project he is working on with Sandy Darity from the Samuel DuBois Cook Center on Social Equity at Duke University, which entails a major survey in Baltimore to collect information about household wealth by race, ethnicity, and national origin. The project is similar to other surveys the Cook Center has conducted in Boston, Los Angeles, and Washington, D.C.

Professor Hamilton’s work has been an important contribution to efforts in Baltimore and elsewhere around economic inclusion. He recently wrote an article for the Federal Reserve Bank of St. Louis on his work.