The April 2015 unrest in Baltimore following the death of Freddie Gray shone a national spotlight on the inequality present in Baltimore’s neighborhoods. The history of discrimination and segregation, and the actors and institutions affected, once again became the focus of many ongoing conversations. Arguably, one of the most important resources for families across the U.S., and in Baltimore, which has been deeply affected by this history is housing.

Recent research, released nearly a year after the national conversation turned its attention back to Baltimore, examines a housing voucher program that was established in 2003 as part of the legal remedy from the Thompson et al v. HUD fair housing court case. In his ruling, Judge Garbis held that the U.S. Department of Housing and Urban Development unfairly concentrated African-American public housing residents in poor and segregated areas of Baltimore City, a violation of the Fair Housing Act of 1968. Judge Garbis ruled that HUD must implement an effective strategy for promoting housing opportunities across the Baltimore region for African American residents of public housing.1

The Baltimore Housing Mobility Program (BHMP) was designed as a partial remedy to this fair housing violation. Through this program low income families move from many of Baltimore’s poorest and most racially segregated neighborhoods to more advantaged and diverse communities across the metropolitan region. The BHMP provides low income families with a housing subsidy, and extensive counseling and support, to assist them with residential moves to more affluent and more racially integrated neighborhoods. Through these neighborhood changes, low-income children moving with BHMP also gain access to dramatically different school contexts that are more racially and economically diverse, and higher-performing. In a recent report released by the Abell Foundation in March, the study team examined the effect of new school contexts on children’s academic achievement after receiving a BHMP voucher.

Researchers found that after moving with the program, children attended more racially and economically diverse schools that were significantly higher performing. Students did face an initial adjustment period in their new school, reflected in a dip in students’ math scores in the first year after moving with the BHMP. However, their scores rebounded by their second year, and students showed steady learning gains over time as they remained in the program. Within five years of voucher receipt students participating in this housing program began performing significantly better on the state standardized assessment tests than they would have in the absence of the program. Although test scores are but one measure of student academic success, the improvements in students’ scores likely reflect additional positive gains in other academic, social, and non-cognitive domains, which support school achievement.

To more broadly examine how the change in school and neighborhood contexts experienced by families moving with the BHMP affected both students and parents, a qualitative in-depth interview study was designed to complement the quantitative analysis of children’s academic outcomes. Through interviews with parents and youth, we examine the processes through which moving with the BHMP affects low income families. For example, what is it about the new neighborhood and school that leads to the positive test score changes identified in the Abell Foundation report?

This qualitative work began in 2012 when the study team conducted in-depth interviews with 110 families. Although these interviews begin to tell the narrative of how parents and children navigate neighborhood and school changes after moving with the BHMP, capturing their experiences at a single point in time cannot fully illuminate the numerous ways in which this program affects families. To further an understanding of how parents and youth are impacted by the BHMP, we must capture their experiences over time.

In the summer of 2015, three years after our initial interviews, the study team conducted 83 follow-up interviews, with the assistance of two 21CC interns, Mollie Cueva-Dabkoski and Olivia Long. Through interviews with 42 parents, and 41 youth who moved with the BHMP while they were in elementary school or high school, our team began the process of understanding change over time. Youth participants were asked to describe their schools, classmates, and teachers. The interns also asked youth to tell us how they navigate their academic and social life at school, the activities they participate in, the classes they take, and how this has changed over time. We asked about their friends and how they form new friendships after changing schools. Adult interviews also asked parents to describe their neighborhoods and their children’s schools. Parents were asked about their interactions with the school and their children’s teachers, and their opinions about the support and programming available to students and families. The team also talked to parents about their neighborhoods, the amenities available to families, and how their children engage with their new neighbors. The parents were asked to compare their experiences in the suburbs with their former city neighborhoods and how things have changed for their family as they spend more time in new neighborhoods.

The interviews will continue in the summer of 2016 as the team heads out again to conduct additional follow-up interviews with parents, and youth who moved with the BHMP during middle school. Again we will focus on their experiences over the past four years in school and in their neighborhoods, understanding how their lives have changed as they engaged with new schools, classmates, teachers, and neighbors after moving with the BHMP.

This has been generously supported by the Abell Foundation, the National Science Foundation, and the Spencer Foundation.

Figures 1-3 show examples of the types of neighborhoods in the Baltimore metropolitan area families move to with the BHMP (note: for confidentiality reasons, photos are purely exemplary and do not contain homes of program participants).

Figure 1: Recipients of BHMP subsidies were relocated to this housing development in Harford County, MD.

Figure 2: A curbside view of a Baltimore County BHMP location where families were relocated.

Figure 3: A tree-lined street in Anne Arundel County where BHMP families from Baltimore City were relocated. 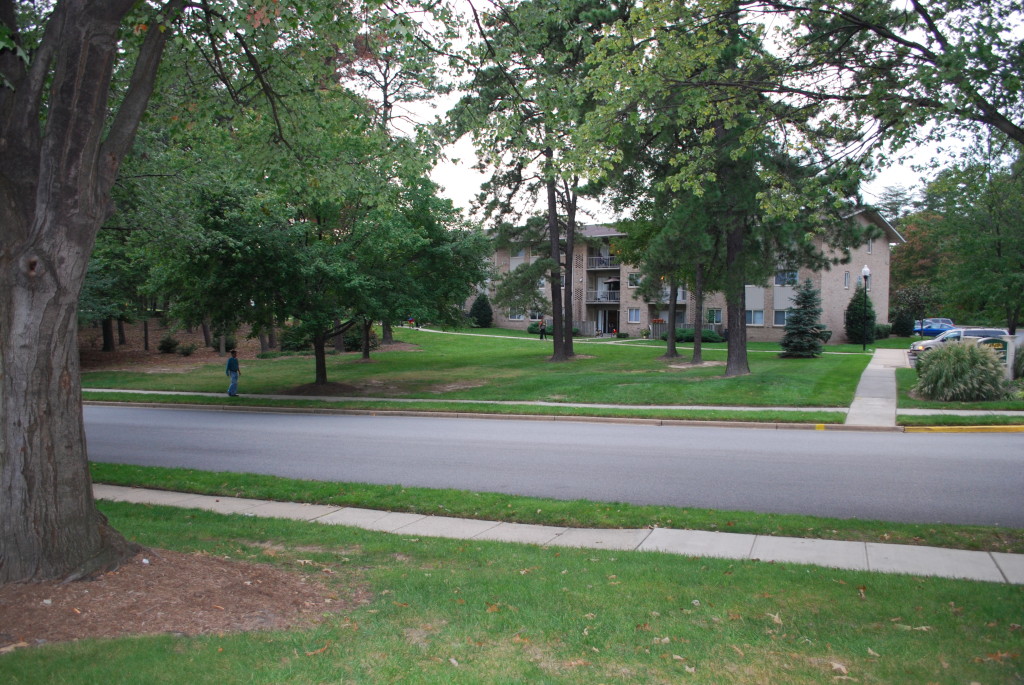