Sampling the Extreme Poor: Notes from a Systematic and Venue-Based Study

The central hypothesis of this study is that a growing number of American families have incomes so low that the difficulties of their living situations are masked by studies that treat the poor as a homogeneous group. A recent study by Edin and Shaefer (2013) suggests that about one-fifth of all poor households with children—and about one-fifth of all poor children—live at the extreme income threshold of only two dollars of cash income per person per day. They refer to this income level as “extreme poverty.” For the purposes of this study, we define extreme poverty as a cash income of no more than 25% of the federal poverty line, which is currently $20,090 for a family of three. Table 1 provides additional detail about measurements of poverty and extreme poverty.

Table 1. Measures of Poverty and Extreme Poverty by Household Size 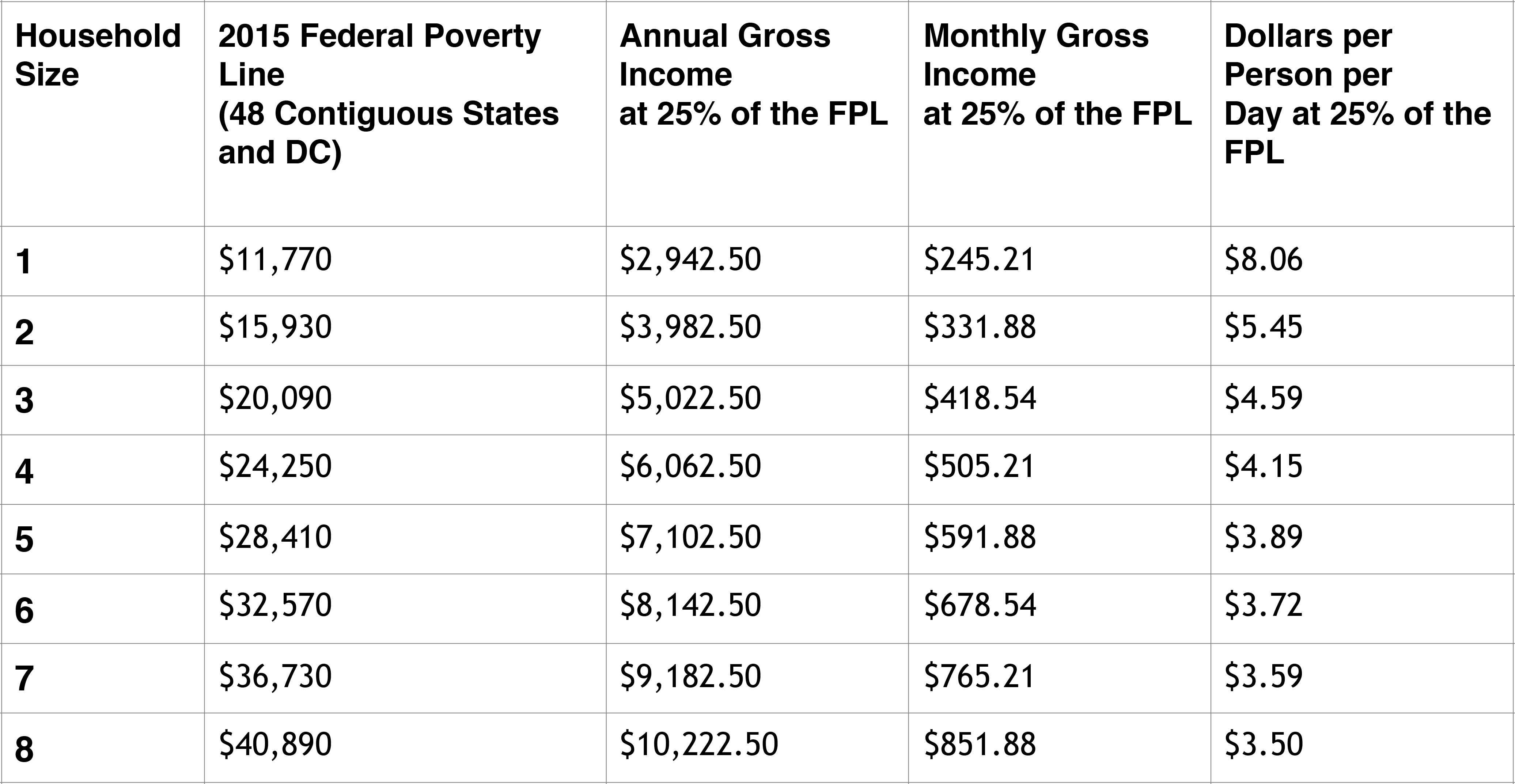 The growth in extreme poverty is the result of several factors, including changes to the Temporary Assistance for Needy Families (TANF) program as part of welfare reform in the 1990s (Edin and Shaefer 2015). The virtual demise of TANF, combined with the expansion of the Earned Income Tax Credit (EITC) and other policy changes, has ushered in an era of an employment-based safety net. As economist Robert Moffitt (2015) has demonstrated, while social welfare expenditures have increased in recent years, the proportion of that spending going to those below 50 percent of the poverty line has decreased. This project set out to demonstrate that a systematic sampling of this population in extreme poverty was possible. Being able to find and talk with these families is necessary to understand the diverse dynamics of poverty in the United States.

This project was conducted in two field sites in Maryland: Baltimore City and Somerset County. These sites were chosen to provide one urban and one rural site with high poverty rates. The research team consisted of two supervising professors (Drs. Andrew Cherlin and Kathryn Edin), two doctoral students (Talbert and Francis), and six research assistants, four of whom were undergraduates (Lauren Abrahams, Marni Epstein, Eliza Schultz, Juliana Wittmann) and two of whom were recent graduates (Kaitlin Edin-Nelson and Geena St. Andrew).

The goal of the study was to test two different sampling methods—random sampling and venue-based sampling—in hopes of reaching the target population: black, white, and Hispanic families with children between the ages of 3 and 15 who have cash incomes of less than 25 percent of the federal poverty line. For the random sample, we identified one majority black, one majority white, and one plurality Hispanic high-poverty Census block group in the urban site, and one majority black and one majority white high-poverty Census block group in the rural site. (There were no Census block groups in the urban site with a majority of Latinos and no rural block group with a plurality of Latinos.) We purchased a list of random addresses in these block groups and then randomly subsampled from these lists. In total, the subsample consisted of 403 addresses: 300 from the three urban block groups (100 each) and 103 from the rural block groups (52 from one, 51 from the other). The team visited all 403 addresses, seeking to screen each household for study eligibility. Tables 2 and 3 list selected demographics for the urban and rural sites.

For the venue-based method of sampling, we identified venues that served the Census block groups chosen for the random sample. Eventually, we broadened our search for venues, particularly in the urban site, to include venues outside of the initial Census block groups. This was done once we realized that the Census block groups chosen for the random sample had limited venues that would work for the venue-based sample. In some venues, we did time interval screening, in which researchers screened every person to visit the venue in a given time interval. In other cases, the venue-based screening was more fluid and involved talking to people as there was opportunity. In a few cases, researchers at a venue made an announcement about the study to those present and invited those who thought they fit the criteria to speak with the researchers further.

Researchers began the study by requiring three “preferred” answers to the hardship questions to be eligible for the study, but we quickly realized that this was too selective and changed the protocol to just one “preferred” response. Thus, a household screened into the interview portion of the study if there was an adult in the household who could speak to the situation there; there were any children between ages 3 and 15; and the respondent indicated in any way that the household was struggling financially. Respondents who participated in the in-depth interview were given $25 in cash or a gift card. To read the full report click here.

Table 4 shows the yield rates from the random sample. It was possible to approach 389 of the 403 randomly selected addresses. Of the 14 addresses not approached, some did not physically exist; some were university-owned student housing; and some were unable to be approached by the researchers. Of the 389 addresses, there were 75 where the researchers were unable to make any contact with someone at the residence, thus the eligibility of these households for the study is unknown. People at another 18 addresses refused participation, so the screener could not be administered. This left a total of 296 addresses where contact was made by the research team and the screening questionnaire was administered. Of these 296 addresses, 257 of them, or 86.8%, were ineligible for the study, mostly because the household did not contain children in the desired age range (3-15). Based on this alone, it is clear that the yield rate even for households potentially eligible was quite low. Indeed, the 38 interviews conducted represents just 9.8% of the total addresses (403), or just 12.9% of the addresses where contact was made and the screening questionnaire was administered (296).

Table 4: Interview Yields from the Five Sites, Random Sampling Only

*** 51 addresses were selected, but 1 addresses did not physically exist, hence the possibility of knocking on 51 doors.

Several conclusions were drawn from this pilot study. First, finding the extreme poor, even in areas of concentrated poverty, is challenging. This could be the case for several reasons. Even though the survey data indicates the population of the extreme poor is quite large in the aggregate, this population is still a small minority of the poor and a much smaller percentage of the overall population. Second, researchers recommend a life-history approach when interviewing the extreme poor. Based upon the interviews conducted for this pilot, the team encountered a number of individuals who, while not extremely poor at the moment of the interview, had experienced extreme poverty in their lifetimes. This finding underscores the fact that extreme poverty can be episodic for some families and highlights the value of using what has been called “narrative interviewing,” in which interviewers are trained to put a premium on eliciting narratives from the respondent (see DeLuca, Clampet-Lundquist, and Edin 2016).

Third, venue-based sampling holds promise for finding these families in the future. Although venue-based sampling was not fully tested in this pilot, our limited experience with this method, combined with the challenges encountered using the random sample, leads us to conclude that a venue-based approach is preferred. However, such sampling should be as systematic as possible, and venues should be varied to try and capture different types of extremely poor families. Venue-based sampling is probably the most cost- and time-effective way of sampling the population of Americans living in extreme poverty. Finally, we suspect that the presence of TANF likely affects the prevalence of extreme poverty, and this effect is differential across geography. While TANF does not even lift a family above 50% of the federal poverty line, it does lift them out of extreme poverty. Thus, the presence of TANF, even if much smaller than in past decades, indeed makes a dent in extreme poverty. Figure 1 shows the percent of families receiving TANF in Baltimore by neighborhood.